I undertake a huge project on a whim and it turns out very well!

This is probably the most dedicated to a personal project that I’ve ever been.  Usually, I start off great (which I did), either get bored (which I have not) or convince myself that the project is a stupid idea and I am a stupid idiot (which I did), and then give up.

I’ve not given up!

At the onset, this has always been a place for me to start fleshing out ideas and to get some inspiration.  I’ve not really shared this with anyone because, well, I don’t want people to judge me.  To be honest, it’s slightly hypocritical of me. I encourage (and sometimes make) my students share their work when they would rather not share their masterpieces. Now that I’m looking at it like this, I keep thinking that I need to share it out, but I also remember that there is a huge difference between my classroom and the internet…

Let’s just start talking about this stupid project today, ok?  Today, the work deals with the area outside of the western walls, up to the fortifications of the dwarven kingdom.  This very easily could have been wasted space–it was a green hill.  For some reason, I started to see a vision of things it could have been, and I was instantly hooked. My mind couldn’t keep up with my imagination.

I thought about writing this up as lore but ultimately decided against it.  I think that I will write the backstory to this area after I’ve come back and finished working on some builds in this area.

I see this place as multiple things throughout the years:

Anyway, I finished up this build by expanding a river to separate the dwarves’ mountainside and the plain green openness. 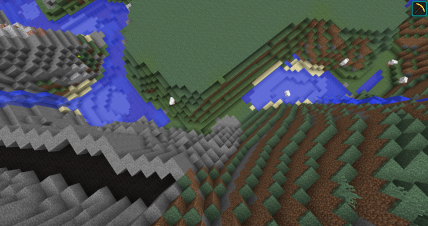 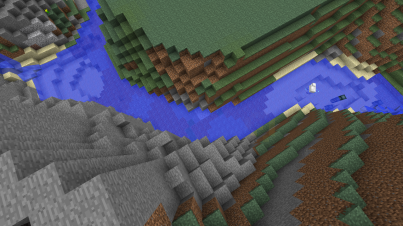 This was something that I had not considered having to do.  I need better rivers in this world after all!  So, in the future, expect some Water-type related work! Until next time!