So, a massive overhaul is now in the works over in the eastern kingdom. I’m incredibly excited about this build, but this is going to be a long haul!

Are you ready for this? Am I?

Today marks the start of a new, and if I may be so bold, fantastic project.  It’ll be located by the eastern gate, just north of the main street.  In the pictures below, it’s the giant awkward mountain that was sticking out randomly and awkwardly.  In the left picture below, that mountain is in the center top portion of the image. It’s actually a little easier to see it in the right picture, off to the left-hand side.

So, the project there, meaning that the first step of this build was to, well, remove a mountain!

Now, I’m not going to fill up this post with a bunch of random pictures that don’t make a lot of sense out of context. The best way to convey this process to you would be to show you a time-lapse, so roll that slide show!

The big idea of this build is to include a water feature in the nicer portion of the kingdom which will become the “more beautiful’ district. There will be bridges, walkways, and waterfalls!

Obviously, this is a massive undertaking and is nowhere near completion.  The good part about the magnitude of this build is that it ties in with my work with the main street and town square.  Basically, I took two smaller builds, but still significant in their own right, and combined them into a super mega crazy build.

I’ve got two things sticking out in my head right now that I need to tackle:

With the end of the time that my brother and I had to work on this project, we walked from outside the eastern gate, down the main street, over what will be a bridge, and stopped at where the new road will be constructed.

I tried to take some snapshots that captured the feeling that I had when walking by this section.  I can’t wait to see what that building will look like that is currently just red wool.  I want to see how the water develops. This area gives me hope, which I realize sounds totally stupid.  It’s the same feeling I had when I first started adding the roads in though. This section is really turning into something–something that I and my brother created. It’s mind-blowing. 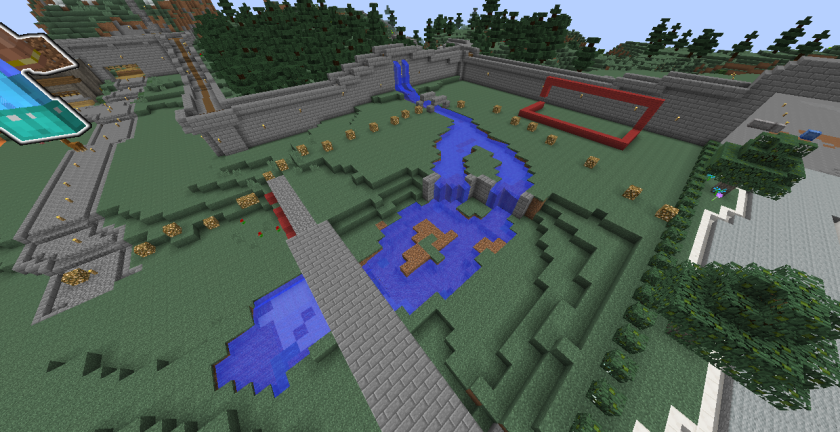 Expect plenty of updates in the future on this! I can’t wait to show you more!