Now that the structure is done, I can go in and start to finalize different elements of it. Well, you know me, finalize it…for now!

Edit: Apparently, I did it again.  I thought I had finalized this post and it was nooooooo where near done. Whoops! Here’s another “mostly-image” post! Sorry! -AJ 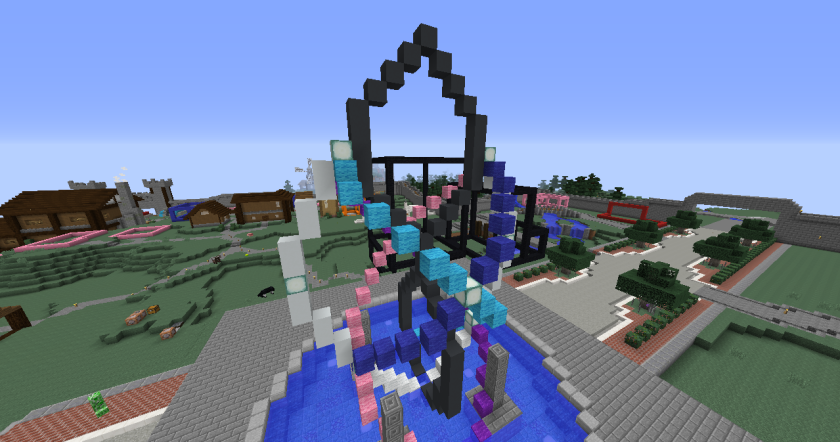 Replacing wool with concrete. White wool only, but it looks so much better. 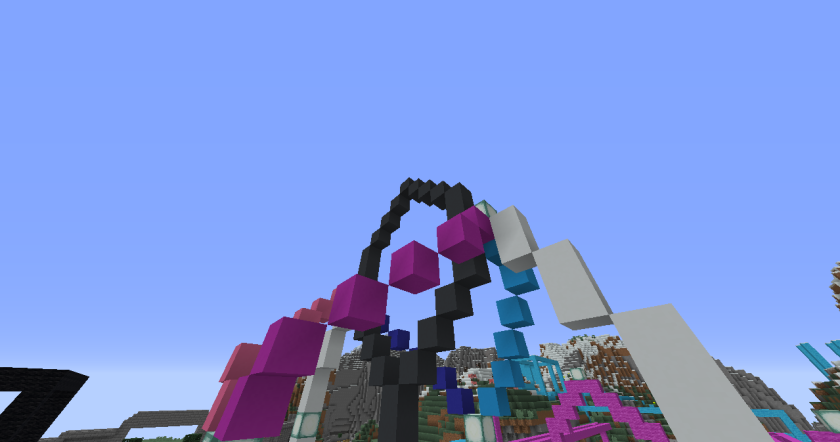 Top half all concreted up! Also changed purple to magenta. It just looks cleaner I think. 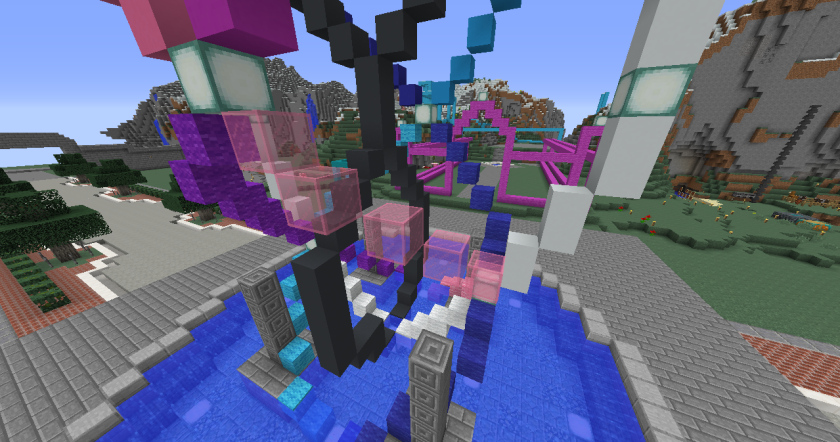 All concreted up, but I’m not sure about the colors… They may have to change. Maybe if I did one blue’ish color with one pink’ish color instead of all blue on one side and all pink on the other…

Why am I building this silly fountain? Because it’s a part of my story, that’s why! Today, I want to play around with the lore behind this fountain, see what comes out of the ole’ brain space!

Welcome back to the fountain! Today, I want to flesh out some ideas about this fountain.  Now, remember, I am an idiot. Also remember, that this is basically a glorified stream of consciousness, meaning that my already weak filter is even more non-existent than usual. With that being said, let us begin down this deep dark rabbit hole that is my mind.

At the base of the “worms,” you see four pillars standing on the platforms.  Each of these pillars is a statue of a hero. These four heroes were a part of a team that defended the city from an evil force doing unspeakable things. The odd part of this team is that two of its members would be human.

Why is this weird? Well, initially, I wanted to make this city populated by every fantasy race imaginable, except for humans.  I wanted humanity to be regarded the same way we, here, view fantasy creatures. In other words, humans would be the fantasy creatures. This leads me to an issue, however…. Who would live in this city? My first reaction would be elves, and I wouldn’t actually be too upset about that. However, I can hear people complaining already: “Elves live in the forest!”

Anyway, the more I think about it, the more I like the idea of this being an elvish city.  Humans here used to live in small, rural places, and now we live in the cities, so perhaps this is a similar progression.  It fits in perfectly with the narrative of conflicts with the dwarves that I’ve already established, so maybe I just figured something out that I’ve been mulling over for a long time… Thanks, internet!

Back to the original starting point, AJ! (See, this is what it’s like in my head. I start one place and very quickly end up somewhere completely different!) These four heroes save the day, and two of the heroes are humans.  They would have come through the portal that is built to the north of the city.  The third member would be an elvish woman of some sort of nobility (maybe), and a fierce warrior.  The fourth, I’ll be honest…I’m not sure yet.  Strangely, nothing crazy is popping in my head right now.

The fourth hero is actually going to be our fallen hero. Have I mentioned that idea yet? Hmm…I don’t remember, but I believe I have. Anyway, after the city was saved, the citizens commissioned this fountain to celebrate their awesomeness.  After the return of the hero, who is now not really a hero anymore, the fountain will remain.  In fact, my plan is for it to help support his power grab.  That’s the cool part with fallen heroes, they WERE good at one point, so what happens to their reputation if they are a) smart and b) not good anymore? Would they be able to shift public opinion to gain support for something that isn’t good?

So, that’s my thoughts with this fountain. I guess it could be described as a corrupted power symbol, sharing the same story of a hero who had fallen. 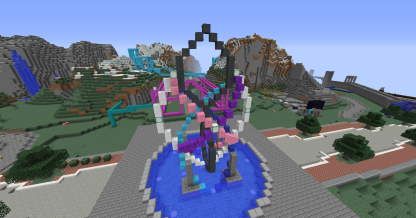 After some final thoughts, I decided to change some colors around. The gray on the inside gets lost in the ground from above, so I decided that I needed to either make it brighter or darker. With white already a part of the build already, I decided to go dark and was immediately happy with my decision.

As one exits the palace (that is still not started…), one gets an excellent view of this build. Night time makes it look gorgeous! Next time, I plan on finishing off this build. The biggest change that will occur? Getting rid of that wool!

Today’s post is going to be a little different. I’ve run out of time, so I’ll be presenting mostly pictures of the fountain today with random thoughts.

To begin with, I added some below-the-water feature, but they still kind of look like worms though.

Plenty of work left, but this is not a bad stopping point for today.

Time to give the Palace District some love! Fountain decorations, any one?

Whenever I think of fountains, I’m taken back to my college years at Purdue University. One of the staple activities on campus is to run through the different fountains.  While I can’t run through the Palace District’s fountain (you know, because it’s Minecraft), I still find myself thinking back fondly to that time of my life where final exams were the worst thing I had to deal with. Anyway, I want to make something cool out of this fountain, and let’s be real, it desperately needs some work.

Added some pillars…. What else could go here? Honestly, I sat staring at my screen for a good ten minutes before I figured out a possibility.  Here’s what I came up with:

Ah! We got worms in our city! Hmmm…. It’s a start, and I like it, but I need to add something more to this build. 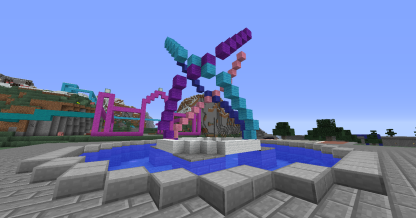 It’s a start, but I don’t like the pattern. Maybe I should change the two newest additions? 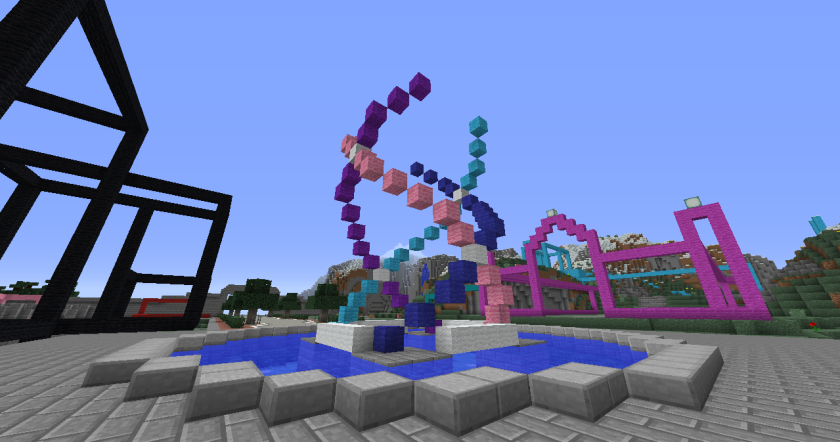 You know, for having absolutely no idea what I was planning for this section, I’m actually quite pleased with how it turned out. It almost actually looks like a piece of art! Almost. Don’t worry, I’m not getting a big head.

Next time, we’ll be coming back to this fountain and adding some more. Hopefully I like it as much then as I do now!